Games of the Elderly 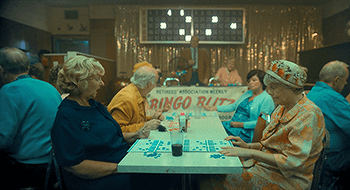 Certain tabletop games are often associated with seniors playing them. It varies a bit on the culture, but common "old-people games" include bingo, poker, bridge, gin rummy, canasta, dominoes (in some European countries), checkers, and mahjong (especially associated with elderly, Jewish, American women).

This might stem from the fact that these games are played sitting down, and some old people are less active than younger people (although why this stereotype doesn't apply to all games played sitting down is anyone's guess). Also, many retirement homes hold games, both for that reason, and because they're easy for everyone to play and it's a good opportunity to socialise.

Elders are often seen going out on the regular to play bingo or poker or whatever with their (usually equally-elderly) friends, and that might take up most of their social life. The "going out" aspect may also be scrapped in the favour of having everyone at a nursing home play one of these games.

Also common in fiction is the plot device of a younger person (often a child or teen) being forced to play a game with their elderly relative or acquaintance, which they'll often find boring or, if they're an Easily Embarrassed Youngster, embarrassing.

Another common gag centring on bingo specifically is that elders consider bingo Serious Business and are incredibly sore losers when it comes to it.

Compare Needlework Is for Old People for another stereotype about old people's hobbies and Smart People Play Chess, Dartboard of Hate, and Bad Guys Play Pool for other game stereotypes. If a younger person plays one of these games, it might be considered Incredibly Lame Fun and the younger person might be The Bore (since old age is associated with being boring).