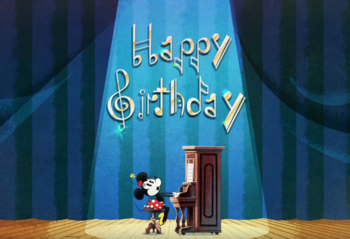 I know it's not much, but it's the best I can do
My gift is my song, and this one's for you
— Elton John, "Your Song

When a gift is given, it's personal, and few things are as personal and meaningful as pouring heart and soul into writing and/or performing a song; every lyric crafted with the recipient in mind, and a melody composed to fit their musical tastes. Perhaps the giver knows of a song the recipient likes or will like, and decides to perform it as a present. If it's a gift to a romantic interest, it could be a sensual serenade or part of a Mixtape of Love.

However, it could also be something unwanted, especially if the recipient is only focused on material possessions and and does not appreciate the thought behind it. Inversely, it could also be a quick, lazy gift from the giver, or a massive ego trip of the giver "blessing others with the gift of their voice."

It is important to note that this is not just someone singing to a person they like, but when a song's status is elevated to fill the role of a gift, possibly replacing material presents.

Not to be confused with someone who is a gifted singer or has The Gift of musical talent. Can overlap with This Is Your Song.