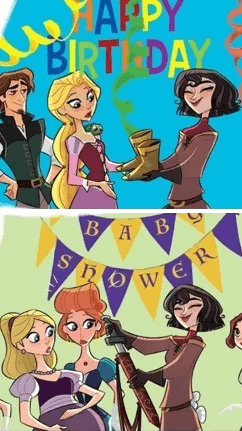 For all the gifts you don't want, Cassandra has you covered.
Dimitri: It's kind of pathetic to think about it all these years later, but can you guess what I gave her as a parting gift?
Byleth: Flowers?
Dimitri: No, that makes too much sense. Actually, I gave her a dagger! You should have seen the look on her face!
— Fire Emblem: Three Houses
Advertisement:

A gift giving occasion has arisen. A birthday, the annual Tropenalia festival, that winter holiday that may or may not be Christmas. Or maybe somebody just feels generous because things are going well and they love their friends.

When the gift is given it is one of the following:

This trope is mainly used to illustrate clueless or thoughtless gift-giving, especially in the case of one who gives the gift that is more a gift to themselves than a gift to the recipient. Problematic elements of this trope include sexism which affects men and women both:

Compare with Convenience Store Gift Shopping, where the giver barely cares at all, and "Gift of the Magi" Plot where the giver cares a great deal. See also the Homemade Sweater from Hell, a gift almost guaranteed to cause a gaffe. Compare Crappy Homemade Gift.

Sister Trope to Unwanted Gift Plot, wherein the giver is sincerely and with care aforethought trying to get a nice gift they believe the recipient will love, but they're unfortunately very mistaken; and with My New Gift Is Lame which is also a sincere gift given that the recipient does not love.

After being given a set of keys for her birthday, Helen is dismayed to see they belong to a moped rather than a nice new car.

After being given a set of keys for her birthday, Helen is dismayed to see they belong to a moped rather than a nice new car.