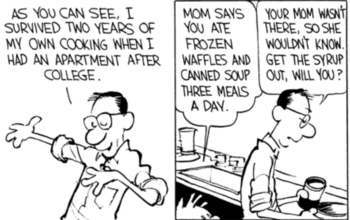 The next time Dad gets breakfast
When Mummy's sleeping late,
I think I'll skip the waffles.
I'd sooner eat the plate!
—"Mummy Slept Late and Daddy Fixed Breakfast" by John Ciardi
Advertisement:

Fathers, bumbling or otherwise, show no ability to cook or interest in doing so. When forced to cook because their wife is sick or absent, expect the family to live off of:

The main exception to this trope is food cooked outside on a barbecue grill, especially such things as hamburgers, steaks, and hot dogs, perhaps because these foods are seen as stereotypically masculine.

With the increasing numbers of working mothers and single-parent families since the 1990s, this trope has become something of an Undead Horse Trope but it can still be seen from time to time in works mostly due to Rule of Funny.

Supertrope to A Day in Her Apron. Compare Feminine Women Can Cook (the view that cooking is an inherently feminine skill), Men Can't Keep House (not only can they not cook, but they can't clean up either), and Lazy Husband (when the husband is simply too lazy to cook). Contrast the House Husband (who needs to know how since he keeps house while the wife works), Real Men Cook, and Real Men Wear Pink. Not necessarily Lethal Chef, as the food is usually edible, if a bit bland, unhealthy, or repetitive (or some combination of the three). This is usually Played With for Breakfast in Bed, when a husband/father (and/or children) attempt to make breakfast for a mother/wife for Mother's Day or an anniversary. See also Ramen as Dehydrated Noodles for a similar food-related stereotype.