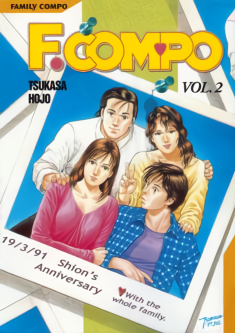 By the mangaka Tsukasa Hojo, Family Compo is a Slice of Life manga that, perhaps, is a more realistic than average depiction of transsexuality.

Ordinary college student Masahiko goes to live with his aunt and uncle, Yukari and Sora Wakanae. While initially excited about meeting his relatives for the first time, he soon discovers that his lovely aunt Yukari is physically male and his handsome uncle Sora is physically female.

He doesn't take it well. However, given Masahiko's current fate - living alone in a fetid apartment that he can't afford and with no family to return to - he decides to stay anyway. Eventually, Masahiko's desire for a real home coincide with with the Wakanaes' surprising generosity to anyone who is willing to accept their family at face value, and he quickly becomes Happily Adopted into the household.

Do not confuse with the similarly named Family Complex.