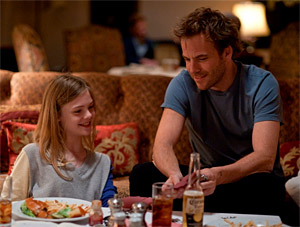 Somewhere is a 2010 drama and writer and director Sofia Coppola's fourth feature film. It stars Elle Fanning and Stephen Dorff, as well as Ellie Kemper, Chris Pontius, and Michelle Monaghan in bit roles. The film examines themes of success and isolation similar to Coppola's previous works, particularly Lost in Translation. Once again, the protagonist is a celebrity going through an existential crisis.

Johnny Marco is an actor who has recently divorced and lives an empty life consisting of alcohol, women, and his Ferrari. When his pre-teen daughter Cleo comes to spend a week with Johnny before she goes off to summer camp, Johnny is forced to re-examine his life.