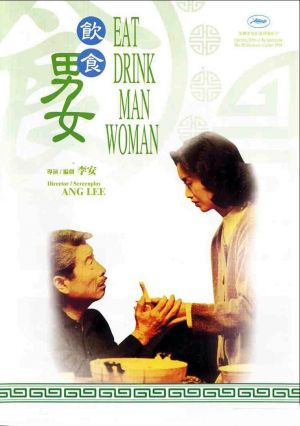 "Eat drink, man woman. Food and sex. Basic human desires. Can't avoid them! All my life, every day, all I do. It pisses me off... is that all there is? Is this the good life?"
— Tao Chu
Advertisement:

A 1994 romantic drama by Ang Lee. Tao Chu, the semi-retired Master Chef of a large restaurant in Taipei, is a melancholic widower who lives in a large house with his three unmarried daughters: Jia-Jen, a heartbroken chemistry teacher; Jia-Chien, a fast-rising airline executive; and Jia-Ning, a teen student who works in a fast food restaurant. Though they live together, the family is emotionally isolated, and their last remaining common ground is an elaborate dinner every Sunday night. Tensions mount as the daughters try to seek personal fulfillment while balancing the issues arising from their father's advancing age.

This film provides examples of the following tropes