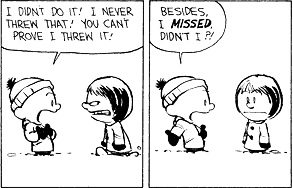 "The defendant petitions the court for a new trial on the grounds that his lawyer is incompetent."
"The boy got out in front of the car!" "There was no boy!" "The boy hit me first!"
— The Music Video Show, 231st episode.

This is for when a character says something clearly contradictory, if not completely opposite, to what they literally said right beforehand.

May sometimes happen in the context of a Hurricane of Excuses. When a contradiction seems immediate to the viewer but is not immediate in in-universe time, that would be a Gilligan Cut. See also Verbal Backspace, I Resemble That Remark!, Ironic Echo Cut, Confession Deferred. Subtrope of Hypocritical Humor. For instances where a character is contradicted by someone/something else, see Instantly Proven Wrong. If the speaker waits until their audience is out of earshot to contradict themselves, that's Two-Faced Aside. See also By "No", I Mean "Yes".

Sorry we don't have any examples of this trope for you, but we do have a list of many instances when this trope is applied to works of fiction:

After finishing a beaver game, AVGN says he won't make a beaver joke because he has high-class internet content, then utters a string of very not high-class curses.

After finishing a beaver game, AVGN says he won't make a beaver joke because he has high-class internet content, then utters a string of very not high-class curses.