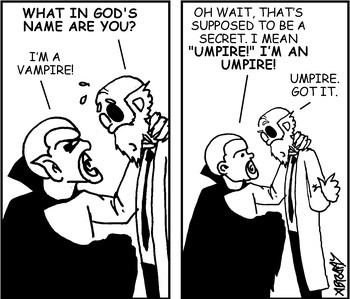 Kyle: We have to do something!
Stan: Well, we can't do anything for now - that fat bitch won't let us!
Mrs. Crabtree: WHAT DID YOU SAY!?
Stan: Uh, I said that rabbits eat lettuce!
— South Park

Generally speaking, Lame Rhyme Dodge is the result of someone having a Did I Just Say That Out Loud? moment, but doesn't want to/is afraid or embarrassed to admit to having said what they said, or, it's a case of someone trying to dodge having heard what somebody else just said to them. It's the little sibling trope to Last-Second Word Swap.

Frequently used by guys who are tongue-tied around women, or teenagers trying to dodge teachers or other adults.

The way both parties try to dodge this situation is to come up with a word that rhymes or sounds similar to the operative word in the sentence. Unfortunately, this usually results in a sentence that makes no sense at all.

A common variant is to have someone dreaming/daydreaming about something, then they're awakened from their reverie by someone saying "What did you say?" and realize they've been saying everything out loud. They proceed with the clumsy cover-up.

Compare Freudian Slip. Not to be confused with Subverted Rhyme Every Occasion.