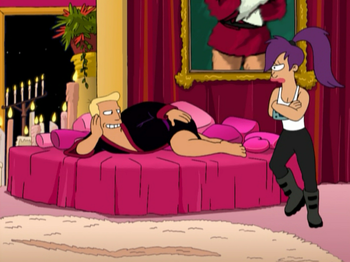 A mission to rescue the animals from a planet on the edge of destruction hits a snag when the Planet Express crew butts heads with Zapp Brannigan, celebrated captain for the Democratic Order Of Planets. Zapp turns out to be a total idiot and Jerkass, but has an eye for the female form—in this case, Leela's. Now Leela must decide whether or not she wants to take one for the team...