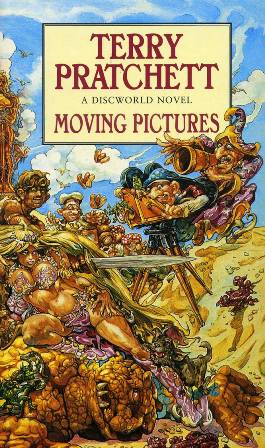 The alchemists of the Discworld have discovered the magic of the silver screen. But what is the dark secret of Holy Wood hill? It's up to Victor Tugelbend ("Can't sing. Can't dance. Can handle a sword a little") and Theda Withel ("I come from a little town you've probably never heard of") to find out!
Advertisement:

The 10th Discworld novel and one that changed the nature of the series in many ways:

The plot is set in motion when the alchemists of Ankh-Morpork discover a way to capture moving images and project them onto a screen. It doesn't take long before the moving pictures become an entertainment sensation, and our protagonists, two aspiring actors named Victor and Ginger, quickly rise to stardom. But all is not well in Holy Wood—something dark is lurking behind the silver screen...

Not to be confused with the Rush album of the same name. Or with, y'know, moving pictures. The Adventure Game Discworld 2 takes some elements from the plot, meshing it liberally with Reaper Man and Lords and Ladies.