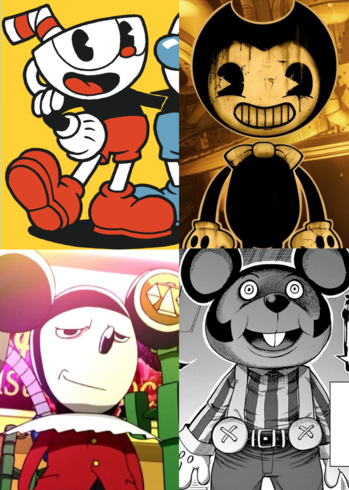 And you thought Mickey was the only silly anthropomorphic character in town.Left to Right, Top to Bottom: Cuphead, Bendy, Squeak and Mockey.
Advertisement:

Mickey Mouse is perhaps the most iconic cartoon character of all time and the prime Mascot of one of the biggest media entertainment companies in the world, so it isn't surprising that there are a multitude of parodies and imitations of the character. Most imitations of Mickey Mouse have at least some of the following attributes:

Some cases may have the Mickey Mouse ersatz accompanied by parodies of Disney's other notable mascot characters (e.g. Goofy, Donald Duck or Minnie Mouse) or be a combination of multiple Disney characters (for instance, a Donald Duck stand-in who dresses like Mickey Mouse). An important thing to note is that in The '30s, it was common for other cartoon characters to emulate Mickey to some degree, so only noteworthy examples from that era (i.e., ones that are blatantly copies of Mickey and actually resulted in legal action from Disney) will be addressed.

Instances where it is very clearly Mickey Mouse himself (named or otherwise) depicted and not a pastiche of him are not this trope. A Sub-Trope of Fountain of Expies.