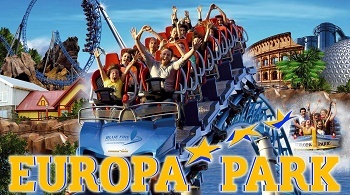 Europa-Park is the largest Theme Park resort in Germany, and the second most popular in Europe just behind Disneyland Paris and before Efteling. It is located near the town of Rust, in Baden-Württemberg (Southwestern Germany). The closest big cities are Freiburg and the French city of Strasbourg.

The park's main theme encompasses Europe's various cultural features, stereotypes and landmarks in nations-themed areas. The park's symbols include The European Union's flag's blue color and yellow starsnote although nations that are not part of the EU such as Switzerland or Russia are represented in the park and a Mickey Mouse-Expy Mascot, Euromaus

◊. Famous landmarks include the giant silvery sphere that houses the "EuroSat" rollercoaster, the panoramic "EuroTower" and rollercoasters such as "Silver Star" note 73 meters high, tallest in Europe until 2012, "Blue Fire", "Wodan" and "EuroMir".

The park opened in 1975, and it is now home to 13 very high capacity roller coasters and can accommodate up to approximately 60,000 guests per day. It counted about 6 million visitors in 2017, 82 per cent of which didn't come for the first time. Rides are built and maintained by the Mack Rides company, which owns the park and builds rollercoasters for other parks throughout the world.

Tropes of the park include: