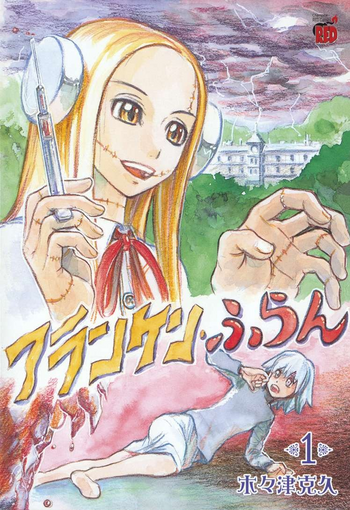 Franken Fran is a Horror Comedy manga by Kigitsu Katsuhisa, which ran in Champion Red from 2006 to 2012. Think Black Jack if you traded most of whatever medical accuracy was still present in Tezuka's manga in favor of Body Horror, Rule of Scary and Black Comedy. And if Black Jack was a female Frankenstein's monster.

In a distant, rarely-visited part of Japan, the world's greatest surgeon, Naomitsu Madaraki, once lived in a large, Gothic-style mansion. However, he's been away on research and hasn't come home in ages. Instead, the professor's "daughter", Fran Madaraki, lives there with many of her own ghoulish creations and her "younger sister" Veronica. She's a very unusual girl, what with the stitch patterns on her face and the giant bolts on either side of her head. However, she's just as skilled at surgery as her father, and if you're willing to pay her price, she can do everything up to and including raising the dead.

Of course, there's a small caveat to all this. Fran has one, very important rule in her work: "regardless of the shape or form, if it can function as a living organism, it is good." In other words, Fran believes that a life should be saved no matter the cost, and that mindset means that the end result of her surgeries are rarely (if ever) pretty.

A mostly episodic series, the manga was serialized in Akita Shoten's Champion Red magazine from September 2006 to February 2012. Seven Seas Entertainment later acquired the English rights, releasing it in an omnibus format from February 2016 to January 2017. A short audio drama adaptation was also released in 2010. In February 2019, a Sequel Series entitled Franken Fran Frantic began serialization, picking up where the original series left off. The author has also written Helen ESP, Meitantei Marnie and Arthur Pyuty wa Yoru no Majo.

Not to be confused with Fran Franken, the wife of the junior Senator from Minnesota.