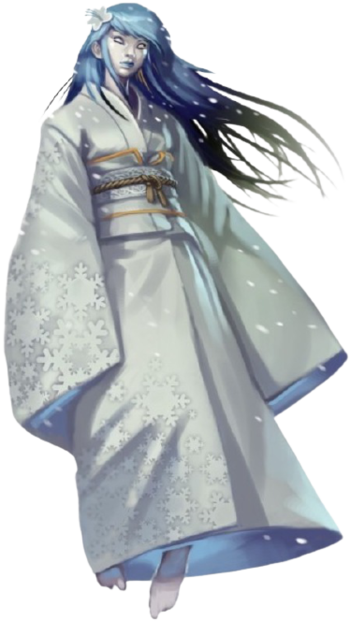 Literally meaning "snow woman", Yuki-onna appear as beautiful women in snowy, cold, or mountainous regions. They're typically depicted as pale women with long, black or (particularly in modern depictions) blue hair that wear kimonos (however, some traditional depictions also show them being nude). Darker and Edgier depictions often reveal this to be an illusion and their true form is actually a blackened, frostbitten mummy. Yuki-onna are the spirits of women who died during snow storms.

Like all mythological creatures, Yuki-onna have many different interpretations. Some are benevolent while others are malicious. Some Yuki-onna are essentially normal women who live in snowy areas, while others have specific powers. These powers can include turning into mist when scared, ice or snow powers, and the ability to hover over snow as to not leave footprints.

Whether Yuki-onna simply like cold climates, are cursed to live in cold climates, or literally can't survive outside of cold climates depends on the incarnation. Some incarnations sleep with lone travelers to steal valuable body warmth, others will simply make them get lost during their travels in order to freeze to death, yet others will kill travelers by tricking them into touching them or a baby (sometimes called a yukinko) they hold in their hands. More benevolent Yuki-onna will either lead the victims to safety (and possibly sleep with them), or simply leave them alone; the more wicked ones will lead them astray to begin with, kill them with the methods described above, or use them. Some evil Yuki-onna have been described as letting their victims go if they are too young or too attractive.

Traditionally, Yuki-onna are just average women however within the past several decades it's become commonplace to see them depicted as princesses. The popularity of Queen Oyuki from Urusei Yatsura and the Winter Royal Lady trope (especially the White Witch from The Chronicles of Narnia) are likely the reasons for this.

If a Yuki-onna isn't just outright called "Yuki-onna", she will usually have a snow themed name (with "Yuki" being the most generic).

Their beautiful designs and dark stories have caused Yuki-onna to become one of the most popular yokai out there, to the degree where they even appear in works made outside of Japan.

Stories of Yuki-onna seducing men and leading them to freeze to death is believed to be an old folkloric explanation for the curious phenomenon of "paradoxical disrobing". People dying of hypothermia often begin to feel uncomfortably hot as their body uses up the very last of its thermal energy and in their final delirium will frequently strip off all their clothes, hastening their demise. Since few if any people who reached such an advanced state of hypothermia ever lived to tell the tale before modern medical technology, being seduced by a beautiful woman was the best explanation anybody could come up with for why so many dead people were found naked in the snow.