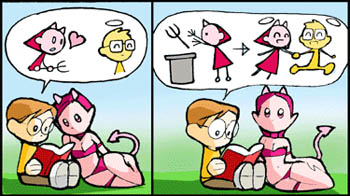 "...read it again."
"Love doesn't lead to the dark side. Passion can lead to rage and fear, and can be controlled, but passion is not the same thing as love. Controlling your passions while being in love, that's what they should teach you to beware, but love itself will save you, not condemn you."
— Jolee Bindo, Knights of the Old Republic
Advertisement:

Love is as (or more!) addictive as The Dark Side. These two forces interact very curiously, Love can just as easily lead a Knight in Shining Armor into the Dark Side, as it can drag the most committed, bloodthirsty, puppy-kicking villain kicking and screaming into being redeemed. Whether they're a Fallen Hero who starts Dating Catwoman, a Professional Killer who fell In Love with the Mark, or the Necessarily Evil who gains a Morality Pet that gives them something to live for, love tends to corrode evil like lemon on popcorn (and it tastes so good!) even if it frightens at first. By and large, Love tends to subvert rather than aid evil, Unholy Matrimony not withstanding. If it isn't Heroic Resolve it's Heroic Willpower, making even the most soul corrupting evil as weak as a Cute Kitten.

Some characters consciously invoke it in order to try to invoke Single Woman Seeks Good Man — or its Gender Flip.

Beware Redemption Equals Death but they may decide it's worth the price and Go Out with a Smile. Alternately, a spurned evil genius is that much more likely of Jumping Off the Slippery Slope and Nuke 'em. If the villain manages to hold on to enough of their evil (or love), they become an Anti-Villain. Sometimes, this comes about when the villain ends up Becoming the Mask, the love they get so freely sorely tempting them to change sides and do a Heel–Face Turn.

It's worth mentioning that this is what the Love Martyr wants to happen, as does the Monster Fangirl and many shippers who put Draco in Leather Pants. In Real Life, this attitude often leads people to The Jerry Springer Show; "But he really loves me! Those bruises will heal!" On the other hand, it may very well be the hero who bruises the baddie, channeling the power of love through violence and thus bringing redemption.

If the redeemer dies, it's possible their memory and lessons they taught their beloved will stick. On the other hand, the deceased could have been simply holding back the person's evil and they now revert with a vengeance. There's also the possibility that instead of curing them, love may very well never change or addict the intended beneficiary.

It should be noted that romantic love isn't the only type of love that can redeem someone. Familial and Platonic Love are both capable of this.

Naturally, Love Makes You Evil is the counterpart to this trope, where love leads you into evil instead of out of it.

See also I Can Change My Beloved, where someone tries to invoke this trope but fails. Contrast with Love Cannot Overcome.

Learning that Drac has "zinged" with her causes Ericka to regret her actions.

Learning that Drac has "zinged" with her causes Ericka to regret her actions.