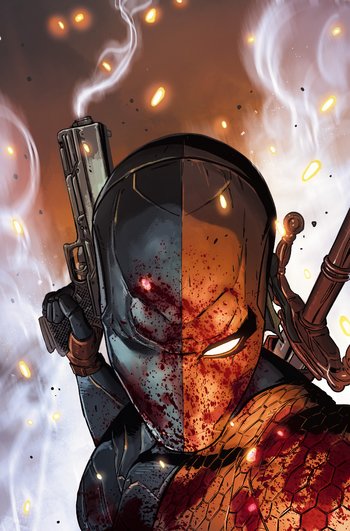 Deathstroke is a 2016 comic book series from DC Comics launched as part of its DC Rebirth branding initiative. The series, initially shipping semi-monthly, is written by Christopher Priest, and stars the titular character along with his family.

The series has a crossover with Titans (Rebirth) and Teen Titans (Rebirth) in The Lazarus Contract, a Bat Family Crossover that features Deathstroke trying to use the Speed Force to revive his dead son, Grant. It is also intended to clear up the Continuity Snarl regarding the Titans' Post-Flashpoint history, along with Deathstroke's relationship with the team, which was similarly Ret-Gone'd in the New 52.

The series was later central to another crossover with Teen Titans, this time called The Terminus Agenda, taking place from March to May of 2019. This crossover focused on a newer incarnation of the Teen Titans as they went on the hunt for Slade Wilson.

The series ended with issue 50.