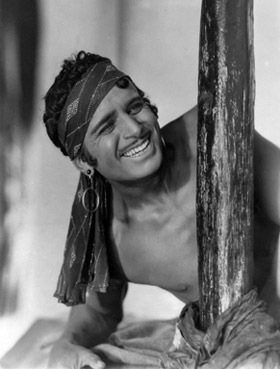 The Thief of Baghdad is a Silent Movie from 1924 loosely based on stories from One Thousand and One Nights.

It is about a thief from Bagdad who falls in love with the daughter of the Caliph, and pretends to be a prince in order to marry her. He subsequently goes on adventures to find a treasure in order to prove his worthiness. Meanwhile, one of the princess's other suitors is an evil Mongol Khan, who is actually planning to take over the city and is sneaking his soldiers inside the walls disguised as porters bringing presents for the princess.

It starred Douglas Fairbanks (who also produced the movie and co-wrote the script), and was directed by Raoul Walsh. Anna May Wong, the first Chinese movie star in Hollywood, plays the slave who's acting as a spy for the Mongol khan.

Not to be confused with the 1940 remake.