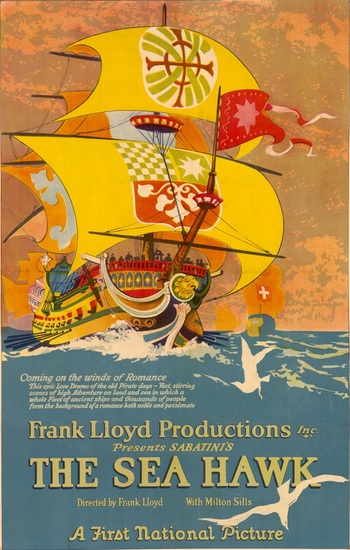 The Sea Hawk is a 1924 silent film based on the novel by Rafael Sabatini. It starred Milton Sills and Enid Bennett and was directed by Frank Lloyd.
Advertisement:

Sir Oliver Tressilian, a gentleman in Elizabethan England, is planning to marry Lady Rosamund Godolphin, but her father and brother don't approve. After Rosamund's brother is killed, suspicion falls upon Sir Oliver. Actually, the killer was Oliver's brother, Lionel Tressilian. Fearing that any attempt to clear Sir Oliver's name will result in his own guilt being discovered, Lionel arranges for his brother to be shanghaied.

Well, one thing leads to another, and Sir Oliver eventually becomes a dreaded Muslim pirate known as the Sea Hawk. Now, with his loyal crew of Moorish buccaneers, he can return to England to take back Rosamund and exact revenge on his duplicitous brother.

In 1940, another film by the same name, starring Errol Flynn, was released, but it was an In Name Only adaptation with a completely different storyline.