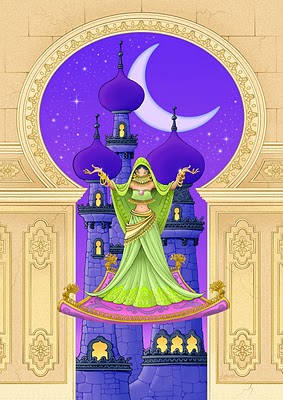 Oh I come from a land, from a faraway place
Where the caravan camels roam
Where it's flat and immense and the heat is intensenote Original lyric was "Where they cut off your ear if they don't like your face"
It's barbaric, but hey, it's home.

When the wind's from the east and the sun's from the west
And the sand in the glass is right,
Come on down, stop on by, hop a carpet and fly
To another Arabian night!
—Aladdin, "Arabian Nights"
Advertisement:

Arabia: land of Ali-Baba, genies, belly dancers, sheikhs, Sultans, evil Grand Viziers (as well as some good ones), dashing thieves and harem girls. When Western Europe was having its Dark Age, the Islamic world was having its Golden Age, both preserving and enhancing the knowledge of civilization.

Here, Baghdad is still a wondrous, glittering city full of magic and mystery, instead of a grungy, sprawling Third World metropolis with soldiers in Humvees battling guys in dynamite vests through the cobblestone streets. It's the Baghdad of Harun al-Rashid

and his artistic and scientific legacy.

Mostly based on the Muslim world which stretched from Southern Europe and North Africa all the way to South Asia during the Middle Ages. Expect for exotic, mystical deserts to appear, despite the fact that people from some parts of the region (ex. Portugal, Turkey, and Bangladesh) lived nowhere close to a desert and probably never saw one all their lives. Maritime Southeast Asia (Indonesia, Brunei, Malaysia), while a bastion of Islam nowadays, is specifically excluded, as it wasn't part of the Muslim world in the Middle Ages.note While Islam's presence there is Older Than They Think, it only became the dominant religion in the 16th century.

Historically, as noted above, this time period is analogous to the Dark Age Europe of the 7th to the 11th century, but this is rarely referenced - and sometimes outright contradicted.

Sometimes this trope is instead based on the 16th-19th centuries' Ottoman Empire. This type of Arabian Nights Days tends to put less emphasis on magic and more on harem girls.

This trope can be a form of Cultural Blending, as the "Islamic world" was (and is) home to various different cultures and languages, such as Arabic, Persian, Turkish, and many others.

A popular trope for this setting is Genie in a Bottle, traditionally a Literal Genie. Flying Carpets are popular too, as are rubies and sapphires bigger than your fist. The look and feel of a Bazaar of the Bizarre often draws heavily on this period as well. Expect at least one reference to the "sands of time."