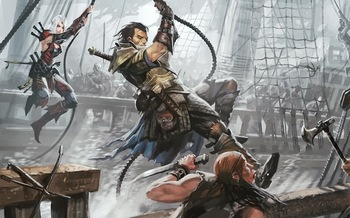 Going over to the other Cool Starship or Cool Boat in person, to capture it, rescue someone, etc. Or just to kill everyone up-close-and-personal.

Having Cool Ships unleash technicolour Beam Spam against each other is all very well, but audiences can tire of such impersonal battles. Additionally, there may be someone or something on that ship that has to be captured or rescued rather than plasmafied.

Sometimes the boarding is stealthy: A Trickster hero might use the fact that their opponent just isn't thinking about people breaking into his ship in flight. Other times it's all about the direct approach: for example the Imperials blasting their way into the Corellian Corvette at the start of Star Wars IV. Tractor Beams can be most helpful here.

Often a small shuttle is used for boarding. It's also possible to beam aboard via Teleportation in some works. A third option is the Boarding Pod, which is simply fired at the target with the intent of punching straight through the hull.

Once aboard, combat can be oddly diffuse, a matter of stalking down deserted corridors and taking pot-shots around corners. Or it might be white-knuckled claustrophobic close combat.

In a nautical setting, it's more a matter of swinging on ropes with a Cutlass Between the Teeth. In more modern settings a rubber dinghy and a rope ladder might be the start of a boarding party's adventures.

Throughout history, and into current times, this is Truth in Television, particularly when dealing with maritime law enforcement agencies such as the US Coast Guard. Real Life versions can involve boats or helicopters, and in their early days, even submarines.note The French submarine-cruiser Surcouf carried on board a fully armed boarding party, a motor launch to transfer from sub to ship, and prisoner storage for 40 prisoners. In the early years of both World Wars, subs often operated this way by surfacing near enemy merchant ships and forcing them to stop to be boarded, and commandeered or sunk after evacuating the crew. This was rather practical for both parties, since the ship's crew was spared death, and the sub's nation gained the resources of the plundered ships. But in both wars, sooner or later some idiot did something to upset the status quo, such as the British disguising armed ships as merchants, and thus subs were forced to adopt the torpedo-first-ask-questions-later strategy.

Ship damaged beyond repair? Just replace it with one of theirs!

Ship damaged beyond repair? Just replace it with one of theirs!