Video Game / From the Depths 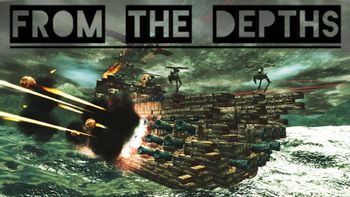 Aavak: But I'm fairly certain, with the right motivation, and also stupid amounts of tea, I could get the Nautilus into space. From the bottom of the ocean.
EnterElysium: ...
Aavak

From The Depths is a voxel-based 3D vehicle combat/real-time strategy/simulator made by Brilliant Skies Ltd. It has similarities between other voxel-based custom vehicle games like Robocraft, Space Engineers, and other similar games.

The goal of the game is to design, build, and fight an array of vehicles using the 250+ components provided by the game. Players can build anything from orbital kill sats, cruise missile subs, aircraft carriers, various aircraft, battleships, helicopters, hovering fortresses, and even land-based vehicles. The player not only designs the vehicles, but also the equipment, like the AI for the vehicle note if any is used, engines, and weapons it uses. The game provides some prefabricated vehicles and weapons, but it is far more effective for the players to design and build their own weapon systems.

From The Depths uses a physics engine, so players have to take into account not only the constant pull of gravity, but other forces as well, such as drag from water and air against certain surfaces. The vehicle's center of mass and balance also has to be accounted for otherwise players designs may tip or flip over when the engines are turned on. The various blocks not only have various shapes note Square, sloped, etc., but also come with their own unique properties. Other factors like fuel, ammo, buoyancy, and weight matter as well. The players have to tweak their designs to get the best performance possible accounting for the various factors involved.

It currently has five general weapon categories that loosely break down into other weapon types: missiles, CRAM cannons, advanced cannons, lasers, and a melee-type weapon set. All the sets are customizable, and require the player to build them according to what they want the weapons to do.

It also currently offers four game modes for players to choose from.

The game can be bought through Steam or Games Rocket. It has two general communities split between the main website and Steam, with the developers and experienced players more active on the original website.

The website for the game can be found here.

From The Depths provides examples of: