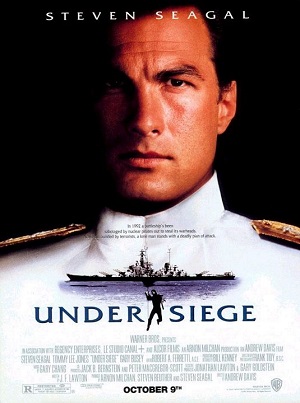 Die Hard ON A BOAT!! One of Steven Seagal's greatest films. It was released in 1992.

Casey Ryback (Seagal) is a valued cook on the USS Missouri, which is undergoing one last party in Pearl Harbor before it goes to San Francisco to be decommissioned. The captain of the ship wanted Ryback to show up in his dress whites with full decorations, but he refused; he eventually said that the captain's birthday was tomorrow and he needed to make bouillabaisse for it, which lets him off the hook.

The captain's birthday is coming, and a surprise party is arranged. Food will be flown in, and so the pesky cook has to be Locked in a Freezer — though not before the bouillabaisse is spat in and he decks Commander Krill (Gary Busey), the XO making the plans. He is guarded by someone on orders not to let him out or listen to him. He isn't let out.

Anyhow, this is an elaborate surprise party. There is a band featuring Tommy Lee Jones and a cake containing Miss July 1989, Jordan Tate. Everyone is allowed off shift — though the captain didn't want that. And there's a clown car's worth of mercenaries ready to take over the ship once everyone's had enough champagne. That's right — a hijacking!

The captain and operations officer are killed; most of the rest of the crew is locked into the forecastle, and a few other sailors get locked in the engine room. The hijackers now have control of a ship with nukes on it. It occurs to them that the kitchen, where our cook is, is not blocked off from the weapons room, so they send two men in to finish off the pesky cook.

Of course, the pesky cook kills them first, and leaves a bomb in a microwave when he finally escapes. He sneaks up to the captain's room, finds him dead, and finds the cake with Miss July in it, unopened. She's alive, but she's missed everything. She's also a self-proclaimed pacifist and never handled a gun.

The XO then finds the cook's service record, which had been locked in the Captain's "eyes only" safe. When they do find it, they learn that he was a Navy SEAL, one of the best ever, who, after a mission in Panama

went wrong, lost his security clearance, leaving him only qualified to be a yeoman — or a cook. Unfortunately for them, he still has the skills of a SEAL.

They try to stick to the plan anyway — the plan being to transfer the nukes to a sub that the CIA thought had been destroyed by mercenaries. The leader of the mercenaries in question is the band leader helping with the hijacking.

Tropes that appear in the film series: