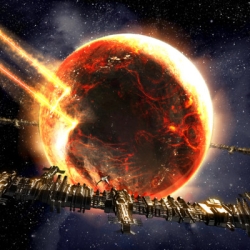 The series (the "X-Universe") contains:

After Albion Prelude, Egosoft switched to a new, and more powerful game engine for the next games of the series.

The series does have an overall plot and extensive backstory but most players find it to be far outshined by the Wide-Open Sandbox empire-building aspect. For that reason, the plot summary is on another page. In X you can just play through the plot, content to stay in your puny little fighter or freighter and not straying much farther than your starting sector, or you can create a universe-spanning trading empire, all but controlling the economy and with enough military power to squash all who dare oppose you. You can also do things that you're not really meant to do, such as almost completely wiping out a race from the universe. It takes a hell of a lot of military resources, and it'll probably break the economy unless you supply it with that race's goods yourself, but nobody's actively stopping you from doing it. The only reason you can't destroy everything is because the game engine tries to keep the economy balanced and will slowly recreate destroyed stations if need be.

The series from X-Tension and beyond - with a notable exception in Rebirth, which caused a massive Broken Base - allows the player to pilot almost anything they can see, from tiny scout ships to five kilometer long destroyers and carriers. There are many classes of ships - fighters, carriers, corvettes, bombers, freighters, etc - and each race has their own ship set with their own unique advantages and disadvantages. Player-owned ships can be commanded to perform tasks, such as patrolling, exploring, or trading.

The economy is an important aspect to the games — the only products that are generated without resources are energy cells and (before X Rebirth) spaceshipsnote Ships built by the player, however, always had material requirements, and until X4 player-owned Solar Power Plants demanded silicon crystals to run. Everything else requires Refining Resources to produce. A satellite factory, for example, may require energy, processed food, and microchips to produce satellites.

Unlike other games, the economy will go gleefully on without the player's intervention. Trading ships will carry wares between stations to make profit, much like the player would - making them competition. New stations will (slowly) be built in systems, and some stations may be lost to pirate attacks, which can cripple the economy. The player can patch holes in the economy by building their own space stations, or completely overtake the entire economy of a race by flooding it with cheap goods.

The games all have extensive support for Game Mods.

In mid-2011 Egosoft announced a revamp of the series via the next main series game, X Rebirth, due out November 2013. To the fanbase's rather abrupt surprise, they then announced a new "expandalone" game using the X3: Terran Conflict engine, Albion Prelude, mere days before its surprise release date. Named after the ship that is the focus of X: Rebirth, Albion adds a Stock Exchange to the game, as well as progressing the story to the massive interstellar war that was brewing by the end of X3: Terran Conflict.

In November 2018, Egosoft released X4: Foundations, which is chronologically set after X3 and X Rebirth. Running on an updated Rebirth engine, it restores most of the features from the previous games such as being able to pilot every ship, a more traditional portal network system, and improved UI controls.

Not to be confused with X the Nintendo tank game or the American Punk Rock band X.