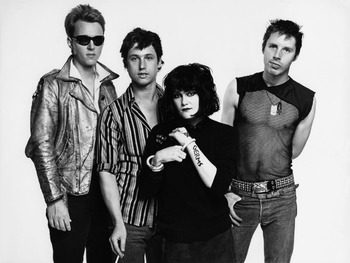 Left to right: Billy Zoom, DJ Bonebrake, Exene Cervenka, and John Doe
"I play too hard when I ought to go to sleep
Well they pick on me 'cause I really got the beat
Some people give me the creeps
Every other week I need a new address
Landlord, landlord, landlord cleaning up the mess
Our whole fucking life is a wreck
We're desperate, get used to it..."
—"We're Desperate", the B-Side of the band's first single (later re-recorded for Wild Gift)
Advertisement:

X is a popular Punk Rock band from Los Angeles which formed in 1977. The band consists of singer Exene Cervenka, singer-guitarist John Doe, bassist Billy Zoom and drummer D.J. Bonebrake. Zoom left the band in 1986 and returned in 1998.

Their first two albums, Los Angeles and Wild Gift, are consistently ranked among the greatest punk albums. They also played an important role in punk rock documentary film The Decline of Western Civilization. The band went on to be progenitors of the Alternative Country genre with their later albums, which mixed their punk roots with country and rockabilly elements. Despite their influence, the band has only had one major hit, with 1985's "Burning House of Love". The band went on hiatus in 1989, but regrouped in 1993 and have reformed sporadically for tours and low-key recording projects ever since.

Tropes that apply to X: