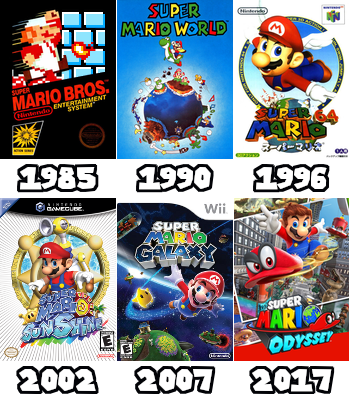 As the decades go on, Mario still stands strong.
Advertisement:

Video games as a medium are significantly younger than TV or print, but that doesn't mean that there aren't a few classics of the genre.

Some games are memorable for their soundtracks, using the limited soundchips and internal speakers of their time to make a work of sonic art that is instantly recognized years later. Sometimes the story paints an epic that draws in the player until they suddenly come up for air at 3:00 AM wondering what happened to the day, or it just has that Just One More Level! effect that causes the same. Some games have a character that is like the imaginary friend that grows up with you, and is always ready to welcome you back for a visit.

And then there's those that have the total package. The winners of the test of time and advancing technology. Here we honor the Video Game Long Runners.

To be added, a franchise should have at least six games (barring e.g. mobile spin-offs) and span at least ten years. Alternatively, franchises based around a single or couple of continuous update model games (e.g. MMOs and MOBAs) should should have had significant content updates between those games during at least ten different years. Sports games based on real-world leagues are generally disqualified, since they get an update every year.

The presence of Capcom Sequel Stagnation is of course, up for debate.