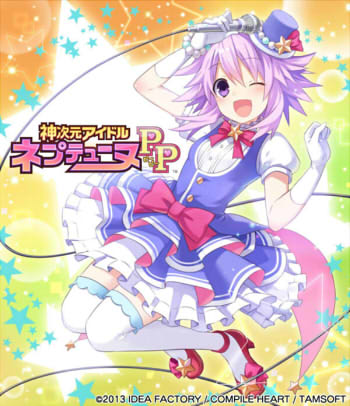 Ultradimension Idol Neptune Takes The Stage
The first Neptunia game to debut on a portable, Hyperdimension Neptunia: Producing Perfection or Hyperdimension Neptunia PP (Japanese title: Kami Jigen Idol Neptune PP) is the first of three spin-offs created for the PlayStation Vita. The game still features moe anthropomorphisms of the 7th generation consoles (and their handhelds), however, as idol singers competing for shares.
Advertisement:

The game centers around the main character, the producer, whose goal is to help the Goddess of their choice compete against rival company MOB48 in concerts to earn more shares. The main goal of the game is to get fans. By raising the selected CPUs various stats through training and lessons, and promoting through through advertising and media stunts, the CPU must aim to become the top idol in Gameindustri.

For each concert, the number of fans and haters will change, though it all depends. The CPUs can be changed into various outfits before the concerts, and during the concert, special effects can be triggered and the camera angle can be changed to change the viewing experience. During live events, the CPU can use HDD to transform mid-song, altering their singing voice and earning more points.

The question at the end of all of this isn't exactly why this game was made, so much as what took it so long in the first place.