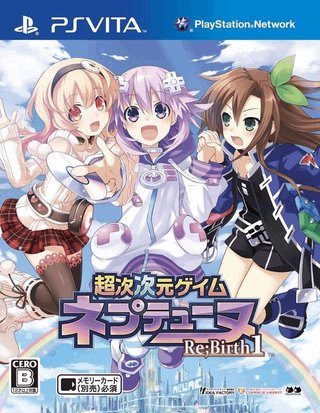 Hyperdimension Neptunia Re;Birth1 (Chō Ji Jigen Game Neptune Re;Birth1) is the enhanced remake of Hyperdimension Neptunia for the PlayStation Vita and PC, developed by Felistella. In addition to completely reworked visuals, improved framerate performance, new music and voice acting, various gameplay aspects and plot details have been modified. A new feature dubbed the "remake system" unlocks special game modifications such as new dungeons and in-battle perks. Some characters from the original game were removed, such as Gust, Nisa, 5pb and Rednote Although the latter two do return in Re;Birth1 Plus., whilst new characters were added, including the CPU candidates (Nepgear, Uni, Rom, and Ram) and Plutia and Peashy from Hyperdimension Neptunia Victory, in addition to Histoire, are playable as DLC characters; the other three Hyperdimension oracles (Kei Jinguji, Mina Nishizawa, and Chika Hakozaki) were later added as DLC characters on September 5, 2018, as were the child versions of IF and Compa on February 4, 2019, and Uzume Tennouboshi from Megadimension Neptunia VII on May 17, 2019.

The original continent travel system involving dungeons has been scrapped in favour of a world map system akin to that of Hyperdimension Neptunia mk2, and the dungeon and battle systems also based on a style reminiscent to that of Victory. During the development phase, the enhanced Vita version was intended to fill in what were identified as flaws and shortcomings of the original game. Developers aimed to address the concerns of fans, and features of the earlier PS3 version that were often subject to criticism, such as the music and game performance, were given improvements in the new version. The game's theme song is Miracle Portable Mission by Nao and the ending song is Mirai Button by Afilia Saga East.

An Updated Re-release, Hyperdimension Neptunia Re;Birth1 Plus, has since been released for the PlayStation 4. A definitive version, Go! Go! 5 Jigen Game Neptune: re★Verse, is set for release on the PlayStation 5 as part of the series' 10th anniversary.

websites are up now!