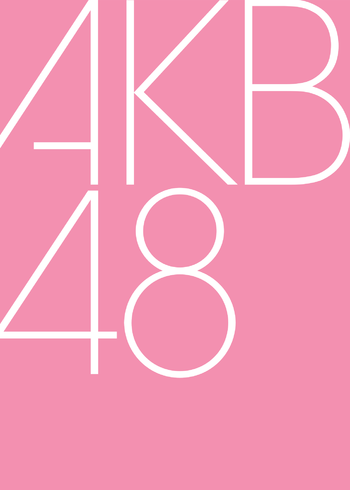 The logo of the group, because getting a photo of all the girls would be... quite hard.
Always grateful! Composed, polite, and precise! AKB! 48!
Advertisement:

Based on the concept of "idols you can meet", AKB48 is an idol group consisting of, you guessed it, 48 members. However, the group currently holds more than 48 members, with even more members scattered in its many sister groups and units:

48 Project groups
Based in Japan:Based overseas:

The group's official rivals are Nogizaka46, which has also spawned several sister groups, collectively called the Sakamichi Series. There are also groups produced by former members, which some refer to as the "daughter groups", such as =LOVE and ≠ME produced by Rino Sashihara and Honey Popcorn produced by Yua Mikami (a.k.a. former SKE48 member Momona Kito).

In 2018, members of the group and its sister groups participated in the reality series Produce48, and an AKB Team 8 member (Hitomi Honda) and two HKT48 members (Sakura Miyawaki and Nako Yabuki) were eventually selected to join the Korean-Japanese group IZ*ONE for 2.5 years. That group has also collaborated with the 48 and 46 groups, and their activities in Japan are managed by AKB's former management.

The group holds performances in their theater in Akihabara, Tokyo and the different teams take turns performing stages-a set list of songs. They also hold special events each year: the Senbatsu Elections, where fans choose their favourite members; the Janken Tournament, where the girls take part in rock-paper-scissors games to get into the Christmas' single senbatsu; the Request Hour, where fans choose their favourite songs and the Draft Tournament, where the captains for all the teams choose between a group of new girls who aren't even trainees.

The franchise doesn't limit itself to music, and it also spawns mobile games, frequent commercial collaborations and even three Dating Sim games published by BANDAI released for PlayStation consoles.

Also has an anime, which is set in the future & directed by Shoji Kawamori, and a manga, set more or less in the present day. There's also the mystery manga series AKB48 Satsujin Jiken (AKB48 Murder Mystery) written by Gosho Aoyama of Case Closed fame, which has been adapted into a 5-part live-action commercial series for Glico Fruit Ice.

For more live-action TV, there's Majisuka Gakuen, the group's longest and most popular drama series, and Mendol Ikemen, that features the members of no3b. And of course, the Long Runner Variety Show AKBingo!.

Compare and contrast to Nanabun No Nijyuuni, another musical project by Yasushi Akimoto.

In 2020, all AKB events were halted due to the COVID-19 Pandemic and months later after the safety measures were implemented... they resumed however, the capital's ongoing state of emergencies are making it impossible. Also, the handshake events were suspended indefinitely. So one year later, they announced a mobile game called AKB48 WORLD when you can be part of the group FOR REAL!!note albeit, as part of managing the activities of the group It's not the group's first management game, though, since there was also the short-lived AKB48 Cherry Bay Blaze for the Chinese market, launched in late-2019 and was shuttered in January 2021 after a major management change at AKB.

Here from World-Famous Akihabara, these tropes have come down to perform for you! Are you ready? ARE! YOU! READY?!