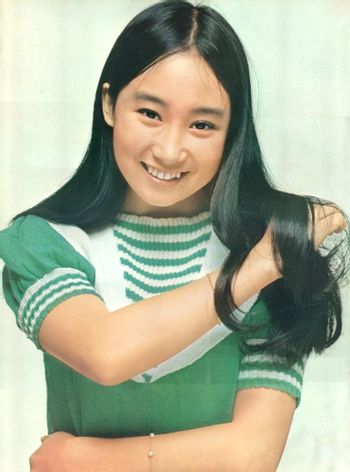 Agnes Chan (Known as 陳美齡; Chan Meiling in Chinese speaking countries) (born 20 August 1955) is a famous pop singer from the early 1970s born in August 20, 1955 in Hong Kong. The Other Wiki states that she's also a television personality, a Doctor of Education, a professor at Japanese universities, an essayist, and a novelist.

Agnes Chan began singing and playing guitar in her junior high years in Hong Kong, as volunteer work for fundraising events. Her cover version of Joni Mitchell's "Circle Game" which was recorded along with her actress sister Irene Chan was a hit in Hong Kong. When she was bought to Japan in 1972 by a Japanese music producer, she became famous after debuting her single "Hinageshi no Hana", due to her looks, voice, and noticeably imperfect Japanese.

She covered several English songs as well, many of them as past decade classics or recent releases by famous artists at the time. Mostly Folk. Of course, she also sang in her native Cantonese, and in addition, Mandarin and released a few albums in this language. Many of her singles and latest releases are Japanese.

Besides being a singer, Agnes Chan is an accomplished writer as well, with most of her books being about raising children — which is mostly based on Agnes' experience raising three sons as a celebrity mother.