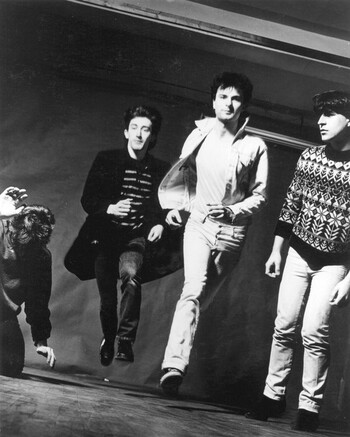 See this, freak out
Nothing's familiar
And nothing seems to fit into the scheme of things
Seeing faces where there shouldn't be faces
No-one's really certain what tomorrow brings
Don't fall, my friend
—"Don't Fall", Script of the Bridge
Advertisement:

The Chameleons were a British post-punk/goth rock band from Middleton, Greater Manchester. They were formed in 1981 and were active from that year until 1987 before splitting in the aftermath of the death of their manager. They were then active again from 2000 to 2003. In the course of their short career the band released four post-punk albums and two acoustic albums, as well as several live albums.

Despite their relatively short lifespan compared to more famous contemporaries like The Cure or Talking Heads, The Chameleons achieved a cult status among fans of the Manchester scene. This was largely due to their atmospheric guitar sound and lead singer Mark Burgess' haunting lyrics. The philosophical themes in his writing cover a range of dark topics including mental breakdown, violent crime, personal loss, apathy, and urban decay set against the dreary landscape of 1980s Manchester.

The group were heavily inspired by U2's earlier ventures into post-punk and to a certain extent by the moody style of Echo And The Bunny Men. While somewhat obscure in the grand scheme of popular music, The Chameleons were cited as a monumental influence by various bands including Interpol, Oasis, The Flaming Lips and The Verve.

They're often called The Chameleons UK so as to not confuse them with an American band by the same name.