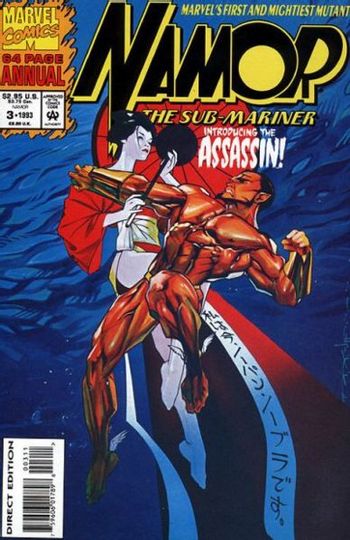 The text on the Assassin's kimono says: "I'm not wearing underwear or a bra right now." Approved by the Comics Code Authority, who apparently do not speak Japanese.
Gru: You are a beautiful woman... Do you speak Spanish?
Mrs. Hattie: Do I look like I speak Spanish?
Gru: You have a face... como un burro.note Like a donkey. A male donkey.
— Despicable Me
Advertisement:

A hidden message in a foreign language. This ostensibly makes these messages available only to bilingual and international audiences. The extra can be anything from a plot-relevant point to additional dialogue (often used to demonstrate that they've Shown Their Work with the language) to a random gag. The opposite of As Long as It Sounds Foreign (where a foreign language is used carelessly on the hopes no one will notice and sounds ridiculous or implausible if a viewer can understand the tongue).

As you may have guessed, this can be a very clever way of Getting Crap Past the Radar. In fact, Hollywood censors once demanded English translations of any part of a screenplay written in a foreign language (whether that language was real or made-up) precisely to thwart this, since subtitles traditionally weren't used in American films even when a character was speaking a language other than English.

If the word still makes sense in another way then it's also a Multiple Reference Pun.

This, of course, not only applies to actual languages, but also the various fictional languages that have full-blown lexicons and can technically be translated — Quenya and Sindarin, Klingon, D'ni from the Myst verse, et cetera.

As well as the costume he wears in Germany labeled "Die Spinne".

Jewel speaks in Portuguese when she first meets Blu and attacks him with it translating to ''Who are you? What are you doing here?'' and ''What?''

Jewel speaks in Portuguese when she first meets Blu and attacks him with it translating to ''Who are you? What are you doing here?'' and ''What?''