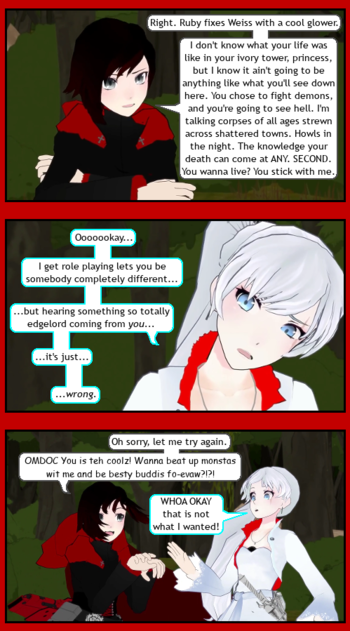 "I was raised on the dice, mister!"

A bored scholarship student sees an older woman looking over a Pathfinder sourcebook and, after talking with her and her husband, jumps on the chance to sign herself and her dormmates up for a campaign... without actually consulting her dormmates first.

Her sister is eager for it, the Japanese exchange student is a little confused, and their other roommate denounces role-playing, only for the sisters to take offense and put her feet into a pair of hideous boots they claim will only come off when the wearer rolls a natural 20.

Meanwhile, four other students discuss the brand new campaign. They have various opinions regarding the new players, with one eager for their arrival, one worried about their impact on the group dynamic, one taking a moderate approach, and one just trying to eat breakfast.

, a RWBY Campaign Comic with a narrative that reflects both a campaign and the players' lives in college.