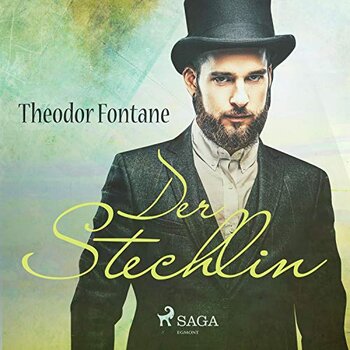 Der Stechlin is the last great novel by the German poet and writer Theodor Fontane; it first appeared in serial form from 1895 to 1897 and as a book in 1899. As the title indicates, it is set on the shore of the Stechlin, a (real) lake in northern Brandenburg, in the (fictional) manor and village of the same name. The central character, Dubslav von Stechlin, is an ageing nobleman or "Junker" rooted in the traditions of Prussia and the province of Brandenburg. There isn't much of a plot: as Fontane wrote to a friend, all that happens is that an old man dies and two young people get married, but the important thing is how this story is told. In countless conversations between the major and minor characters — who come from all walks of life — a perspicacious portrait of German and Prussian society in the first decade of the rule of Wilhelm II emerges. As a summation of the wisdom of Fontane's old age, the novel never quite achieved the popularity of e. g. Effi Briest, but it is considered one of the great German novels, especially after Thomas Mann wrote an essay about it. It was filmed for West German television in 1975.
Advertisement:

Dubslav von Stechlin, a widowed retired officer, lives a quiet life on his estate with his valet Engelke, regularly visited by the Protestant pastor Lorenzen and the village schoolmaster Krippenstapel, and keeping a somewhat looser contact to a few of the other noblemen who live in the surroundings. His only son, Woldemar, is an active cavalry officer in the Guards and stationed in Berlin. Here he moves in more varied social circles; his two closest friends are two fellow officers, the slightly frivolous Captain von Czako and the serious, pious and pedantic government offical and reserve officer von Rex. Woldemar is introduced to the family of Count von Barby, a retired diplomat, and becomes attracted to his two daughters and ends up having to choose between the witty and mysterious Melusine and the more serious and idealistic Armgard. The Barbys are a more "exotic" family — the Count's late wife was Swiss, his daughters grew up in London while he served in the embassy there — and have a very diverse circle of friends and acquaintances, including the Bavarian diplomat Baron Berchtesgaden and his earthy and vivacious wife, the Czech pianist Dr. Wrschowitz, and the excentric painter Cujacius.

In the course of the novel Dubslav unsuccessfully becomes the Conservative candidate in a by-election, which is won by the Social Democratic candidate. This is one of the many illustrations of one of the central themes of the novel, the change from the old to the new. But while Dubslav is politically conservative, he is also very undogmatic and open to new ideas and views that do not agree with his own. This is also made evident in the fact that he appointed the progressive idealist Lorenzen as pastor of the parish church and tutor to his son even though Lorenzen is accused of being a subversive and near-unbeliever by the more conservative and conventional Protestants, not least Dubslav's extremely narrow-minded spinster half-sister Adelheid. But the forces of the new aren't idealized either, and so it is understandable that Lorenzen sums up his position that Lorenzen sums up his aims as "Better with the old as far as possible and with the new as far as necessary."