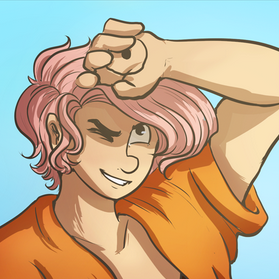 Phineas Kidd
"If we're already made of the stuff that turns the cosmos...
Then what are we waiting for?"
Advertisement:

is a webcomic by Aria Bell.

According to the author: "Kidd Commander is a shonen style adventure comic about a bunch of silly people on a trip to catch the sun, whatever that means. We’re mostly concerned with having a good time and tend to lean towards the romantic side of things!"

. "Kidd Commander is an ongoing adventure series, which means lots and lots of stories!"

The title character of this comic is Phineas Kidd, a girl with pink hair. She wears an orange coat at the beginning of the story, and we soon learn she is a Commander, whatever that means.