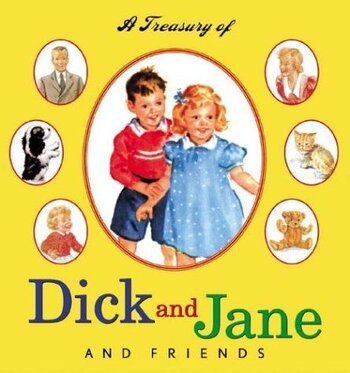 Dick and Jane were the central characters of a series of books for beginner readers featuring short sentences and much repetition. Originally introduced in the 1930s, the books fell out of favour in the 1960s, partly due to changing ideas about reading education that would favour more challenging fare like the books of Dr. Seuss, who created The Cat in the Hat to provide an alternative to Dick and Jane, and partly due to mounting criticism about the idealised world they depicted, but "Dick and Jane" remains a byword for the entire genre.

You can have a look at the format here.

It should be noted that the Dick and Jane books actually came in several graded levels, of which only the first was written in the classic "Dick and Jane" style. More advanced books had practically normal sentences. But where's the fun in that?

The UK equivalent was "Janet and John" and "Peter and Jane", the latter which is still in use as part of the reading curriculum in several commonwealth countries.

Tropes in the Dick and Jane books include: