Music / Off the Deep End 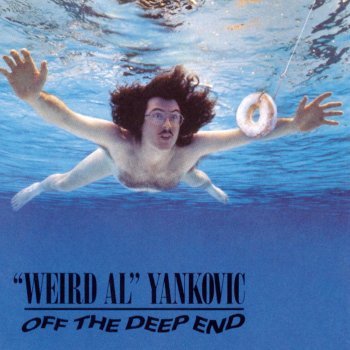 Off the Deep End is the seventh studio album by "Weird Al" Yankovic, released in 1992, and his first to be self-produced after Rick Derringer produced all of his previous ones.

At the start of The '90s, Weird Al's career was in a rut. His 1989 film UHF bombed due to its poor choice of release date, the associated soundtrack & studio album was mostly ignored, Michael Jackson declined permission to parody his recent hit "Black or White" as "Snack All Night" (due to Jackson feeling that the song's message of race relations in America would be trivialized by the parody), and the public was generally starting to move away from Al, who was seeming more and more like a relic of The '80s. It seemed more than likely that Al was over as an artist, but the man was determined to prove he could keep his head above water in the new decade.

Enter an obscure Seattle-based band called Nirvana, who decided to release their second album in 1991. The album's lead single, "Smells Like Teen Spirit", rapidly shot up the charts, catapulted the band and the general grunge scene into mainstream popularity, and rapidly instigated the cultural genesis of the new decade. Having wanted to parody Nirvana for a while but being concerned about their initial obscurity, Al saw "Smells Like Teen Spirit" as his chance. Al managed to obtain permission from Kurt Cobain to parody the song as "Smells Like Nirvana", and with that, found his career rapidly careening back on track.

Off the Deep End spawned three singles: "Smells Like Nirvana", "You Don't Love Me Anymore", and "Taco Grande". The album was a commercial success, peaking at No. 17 on the Billboard charts; its release just a few months after Nevermind's displacing of Jackson's Dangerous as the No. 1 album certainly helped.