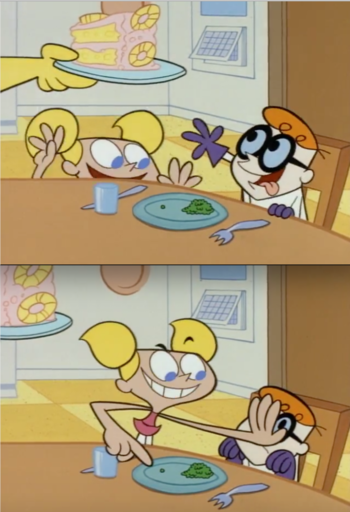 A character is told by someone (usually Mommy or Daddy) to eat all their vegetables or the penalty is that they won't get dessert. Despite occasionally overlapping with Denied Food as Punishment, this isn't meant to be a form of discipline, it's actually more of a rewarding system. Peas and broccoli are the most common vegetables assigned for eating. Oftentimes, this trope applies to children (who have a lot of taste buds that make them dislike vegetables) but can be Played for Laughs with adults as well. Common reactions include protesting, throwing a tantrum, trying to hide the vegetables, or even, begrudgingly, trying to eat them and giving up in the process.