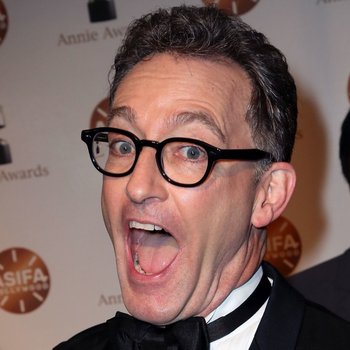 Thomas James Kenny (born July 13, 1962) is an American voice actor and comedian perhaps best known for his work in the animated series SpongeBob SquarePants, in which he is the voice of the eponymous character among others. Aside from voice acting, Kenny starred in the short-lived Fox sketch show, The Edge and was a cast member of the HBO sketch comedy program, Mr. Show, where he worked with Jill Talley, whom he subsequently married. He also hosted the show Funday Night at the Movies on TCM in 2007, which encouraged kids to watch "old movies".
Advertisement:

Kenny voices many characters in many productions, and in his own words "a lot of sweet, kind of stupid yellow characters for some reason" (which would explain Heffer, Dog, and SpongeBob). When he doesn't play those, Kenny usually plays comically serious, authoritative types (usually doctors, businessmen, and game show hosts).

Kenny played his first set of voice actor roles for Rocko's Modern Life. Joe Murray auditioned Kenny for voice acting roles for the series in a large casting call in Los Angeles, California, United States. On one occasion during the production, the producers required Kenny to fill the role of Charlie Adler, who was absent on that occasion. In addition, Kenny had to perform one song and learn how to play another song within ten minutes due to time constraints. Kenny achieved this goal. He said that this helped him believe that he could stand "toe to toe" with other voice actors.

Joe Murray chose Kenny for a voice acting position in Camp Lazlo because Murray, after seeing Kenny's previous work for Rocko's Modern Life, felt that Kenny "adds writing to his roles" and "brings so much".

He's been the announcer for Nickelodeon's annual Kids' Choice Awards for years; at the 2007 show he called himself the "Man of 1,000 Voices, all of them this one." He was featured as the Voice in a Box at the 2008 show, and at the 2009 show he claimed to be the only announcer who does all of his own stunts.

He and his wife, Jill Talley, played the couple in the music video for The Smashing Pumpkins' "Tonight, Tonight". Jill also does voice acting, including appearing in SpongeBob as Plankton's computer wife, Karen Plankton.

Starting in season 9B, Kenny became the voice director of SpongeBob.

Aside from SpongeBob, his most famous role is that of The Ice King from Cartoon Network's Adventure Time.

, which he very rarely uses — once a year, in fact, to tweet that he is still not tweeting.

Notable roles by Tom Kenny include: