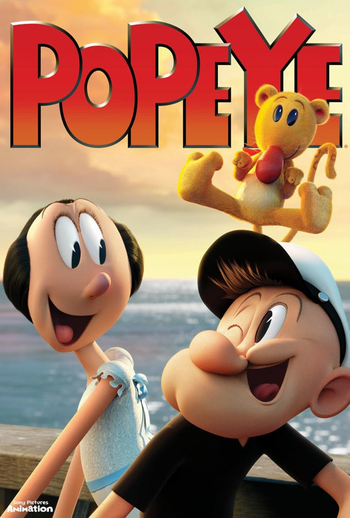 Sony Pictures greenlit an All-CGI Cartoon film based on the Popeye comic strips and animated shorts in 2010, and Genndy Tartakovsky was announced to direct it in 2012 fresh off the success of Hotel Transylvania. A test footage just over a minute long was released in September 2014, but the project was eventually cancelled mid-production in 2015. It was an especially tragic case, as Tartakovsky's animation instructor was a former Fleischer Studios animator. Popeye was voiced by Tom Kenny and Olive Oyl was voiced by Grey DeLisle.

In May 2020, it was announced that a new Popeye movie is in development at King Features Syndicate, with Tartakovsky coming back to helm the project without Sony's involvement (as their rights to the character expired a couple years earlier).

The test footage of the original project can be watched here

The test footage of this project provides examples of: