The Man in the Mirror Talks Back 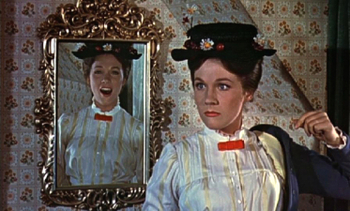 You have Mirror Monologue, where the character is talking to his reflection.

And then you have this trope, which is when the reflection is the one doing the talking (or, occasionally, moving).

The difference? The Mirror Monologue is realistic (physically, if not psychologically); nothing fantastic is happening, so we can pretend we're objective observers. Many versions of this explicitly have the mirror moving in a completely different way than the 'real world', thus bringing it over into either the fantastic, or we're explicitly seeing things through the character's eyes. Those that don't do the 'mirror isn't reflecting the real world' thing via special effects of one sort or another but still qualify are using editing for much the same effect (see, e.g., the first Spider-Man movie, or the Gollum/Sméagol dialogue from film version of The Return of the King).

Usually used, much like the Mirror Monologue, to make visual an internal dialogue, either between different aspects of a character (such as a man and his conscience) or between different personalities sharing the same body; But can sometimes in actuality be a Mirror Self.

See also The Television Talks Back for a similarly unrealistic discussion.

Alternative Title(s): Man In The Mirror Talks Back