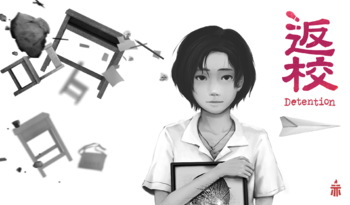 If a paper plane could whisk my dreams away from here...
Where did Ms. Yin go..?
Advertisement:

Detention is a Taiwanese independent horror game developed by Red Candle Games, and released on January 12, 2017. A 2D point-and-click side-scroller, Detention is set in 1960s Taiwan during its period of martial law

, and begins with bored second-year high school student Wei Chung Ting falling asleep during a history lecture. While Wei sleeps, class is interrupted by the school's JROTC officer, who pulls aside the teacher, Ms. Yin, to ask about a list in his possession.

Some time later, Wei awakens to find the classroom deserted, with a hasty message saying "typhoon warning" scribbled on the blackboard. Surely enough, a nasty storm is brewing outside the windows, and the school has been evacuated. Rushing to get home and beat the downpour, he encounters senior student Fang Ray Shin in the auditorium on his way out, and they agree to leave school together. But after a horrible incident, the school begins warping itself in strange ways, and hostile spirits called the Lingered appear.

The studio's second game, titled Devotion, was released on February 19, 2019, and is a vast narrative, stylistic, and mechanical departure from its predecessor. A film of the game was released

A series based on the game was released on Netflix in 2020.

Not to be confused with the cartoon or movie that share the name.