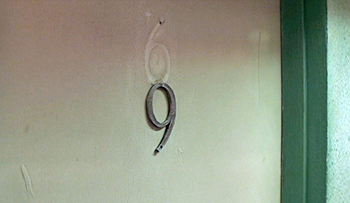 If you rotate the figure 6 so it is upside down, you get a 9, and vice versa.

This trope is about those cases where confusion between these two numbers becomes a plot point. The most common (but not the only) scenarios:

For example: Alice is a detective and has learned from a phone call that weird things are happening in Apartment 6. She goes over there and investigates, but finds nothing. But the phone calls continue, so Alice goes again to Apartment 6, but finds out that the apartment where she was investigating was number 9, but the "9" somehow was unscrewed before and looked like a 6.

This trope also covers any other symbol (or collection thereof) that could be misinterpreted if read at the wrong angle, such as M and W.

Not to be confused with LOL, 69 (especially since that number is immune to this trope).

Radli accidentally delivers a package for Tara (No. 9) to Mrs. Tomos (No. 6).

Radli accidentally delivers a package for Tara (No. 9) to Mrs. Tomos (No. 6).