Anime / Pokémon: Kyurem vs. The Sword of Justice 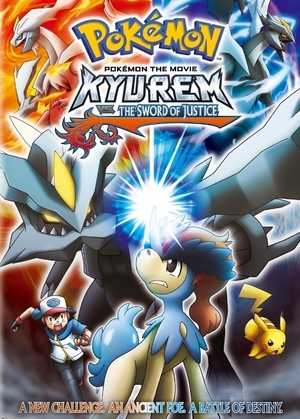 "Sword of Justice"? So does that mean Keldeo got his powers from that other guy?
Advertisement:

Pokémon the Movie: Kyurem vs. The Sword of Justice (known in Japan as Pocket Monsters Best Wishes! The Movie: Kyurem vs. the Sacred Swordsman: Keldeo) is the 15th movie entry in the Pokémon film franchise. It marks the anime debut of the legendary Pokémon Kyurem (as well as Kyurem's two new Formes introduced in Pokémon Black 2 and White 2, Black Kyurem and White Kyurem) and the Legendary Musketeer Pokémon trio, consisting of Cobalion, Terrakion and Virizion with their charge, the eponymous Keldeo (as well as Keldeo's Resolute Forme, also introduced in Pokémon Black 2 and White 2). The movie follows Ash, Iris, Cilan, and their Pokémon as they arrive in the middle of an arising conflict between Keldeo and Kyurem, coming across the other Musketeers in the process.

The film was released in Japan on July 14th, 2012. It aired in the United States on Cartoon Network on December 8th, 2012 and in Canada on YTV on the same day. The English trailer can be viewed here

Pokémon: Kyurem vs. The Sword of Justice features examples of the following tropes: