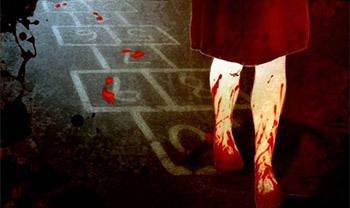 Remember when your parents wanted to keep the floors in the house looking nice and clean so they'd remind you to wipe your shoes off before you came in?

In this instance however, the focus is more on who or what made these footprints rather than why the floors are dirty. Because, let's face it, when a series of footprints suddenly appear in the form of the deep red color of blood or some other watery/dirty/mucky substance, it is... rather unsettling, to say the least.

It can be especially macabre when the traces are distinguishably done by bare feet in a place where nobody would go barefoot, or when you hear the accompanied sound of the footsteps ringing throughout the area, but you can't exactly make out who or what is lurking nearby until you turn around and come face to face with it.

If the person making the footprints is evil or something similar, the muck that is covering their legs and feet will make them look even more out of place and therefore creepier.

This trope is typically used to increase suspense. Therefore it happens in horror or drama themed works.

Contrast Fertile Feet, where a character's footprints are a sign of life instead of foreboding. where If the footprints appear to have been made by a werewolf or some other sort of beast then it's Human-to-Werewolf Footprints. Compare Detectives Follow Footprints.