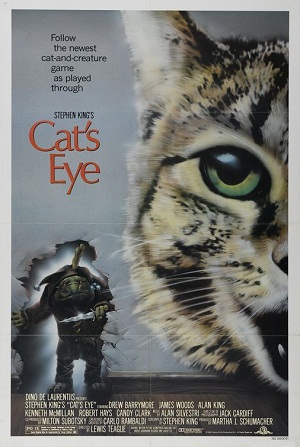 For other works by this name, go here.
Advertisement:

Cat's Eye is a 1985 anthology film produced by Dino De Laurentiis, directed by Lewis Teague and based upon short stories by Stephen King (the first two of which are part of the Night Shift collection, while the third was written by King for this movie). Teague had previously directed another Stephen King adaptation in Cujo. Drew Barrymore appears in the film's last segment in one of her earlier film roles.

In the film, a stray tabby cat links together three tales of suspense and horror:

It has nothing to do with the manga and anime of the same name.