No Matter How Much I Beg 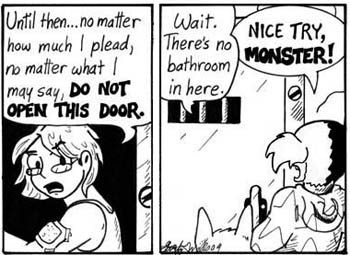 "...and plead, and cry, don't give that paper back to me, EVER."
— Squidward Tentacles, SpongeBob SquarePants, "The Paper"
Advertisement:

A character believes that they will imminently lose their self-control, and therefore takes precautions by asking another character to deny them something at all costs. That something could be an important or dangerous item, or perhaps they may even be asking for themselves to be restrained, taking away their own freedom.

Often, they will add the caveat that no matter what they do or say to try and obtain that thing, and no matter how convincing they sound, they must not be allowed to have it — that is, they are pre-emptively overriding their own authority.

The reason why a character might ask someone to do this to them varies, but two common ones are:

This is usually very stressful for the person being asked to fulfill the request, as they are often a trusted friend, and are now being asked specifically not to trust someone they care about. Commonly, Alice may "test" Bob by acting nice and seeing how quickly he gives in (at which point she will likely berate him for doing exactly what she told him not to do).

This kind of situation can, and often does, turn bad if something happens that Alice didn't foresee, and she now needs exactly what she's told Bob not to give her- cue Bob following her orders to the letter and refusing to give her what she needs, with Alice now left to realize she has put herself in an unfortunate situation of her own making.

This scenario can be played both for comedy and for drama. In comedy, it often overlaps with A Lesson Learned Too Well, where Alice has Bob 'trained' to obey her order to the point where even she can't override it.

More dramatically, the situation may end up with Alice now having to fight Bob. In some cases, Bob will justify his refusal by asking "How do I know this is not a test?", in which case any answer Alice might give him will of course be treated as proof of his suspicion.

Squidward tells SpongeBob to keep the paper with him.

Squidward tells SpongeBob to keep the paper with him.