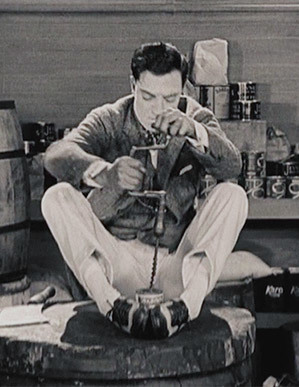 A situation wherein a character hopes to demonstrate his preparedness by showing the massive amounts of canned foods he has stocked in case of an emergency. The demonstration is ruined when he, or another character, points out that he has no can opener. This is usually played for laughs, though it can work as a dramatic situation if the characters are starving. However, the drama of the scenario is somewhat undercut by how any tin can can be cracked open by using a knife (or even a spoon) to create an opening and slice the top open. (Or even just brute force if you're really desperate/creative. Tin can lids work as chisels, by the way.)

Mostly becoming a Discredited Trope as a result of the above, and the fact that most companies are making the transition to pull-tabs on their cans. Still, enough cans remain un-tabbed that it should still be relevant for a while. As a side note, this is a bit of Truth in Television: The sealed tin can was invented in 1810, but the first tin can opener was produced in 1858, meaning that for almost 50 years, everyone had to rely on the chisel-and-brute-force method... of course, that just makes you wonder why fictional characters are so freaked out by it.

The pop-top can was invented by Ermal Cleon Fraze, in 1959, after going on a picnic with his family, and discovering that he had failed to bring along an opener for their canned soft drinks.

The Canned Food Par-tay begins, but then *gasp* there is no can opener! Fortunately the Bone Goomba is able to open it with his teeth.

The Canned Food Par-tay begins, but then *gasp* there is no can opener! Fortunately the Bone Goomba is able to open it with his teeth.