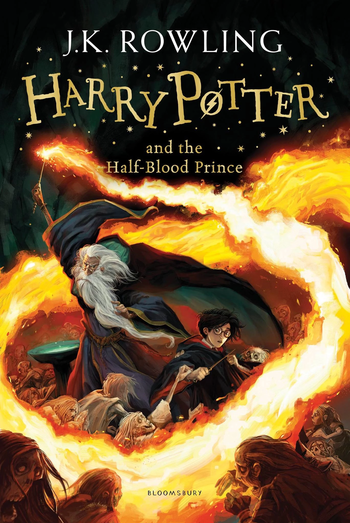 "Apparently I underestimated you, Potter. Who would have thought you knew such dark magic?"
— Severus Snape
Advertisement:

Harry Potter and the Half-Blood Prince is the sixth and penultimate book in the Harry Potter series, published 16 July 16 2005.

The Ministry has finally accepted that Voldemort is back, but that hasn't really made the situation any better. With everyone terrified, obviously unjustifiable arrests happening and misinformation still being printed, just in the other way, events play out to show that the Ministry is in no fit state to stop Voldemort.

But while those events linger over the plot, the action stays fully grounded at Hogwarts. Harry learns more about Voldemort's Back Story, becomes increasingly suspicious of Snape's loyalty, and discovers an old potions textbook annotated with powerful spells and useful notes from its previous owner who identifies himself only as "The Half-Blood Prince". Draco Malfoy is tasked with something by Voldemort himself; and wacky romantic hijinks ensue for everyone.

As Word of God has noted, Half-Blood Prince is where the serialization of Harry Potter hit its zenith. Where all five of the previous novels ended the main plot, Half-Blood Prince’s ending builds up to an emotional release but simply prepares the reader for Deathly Hallows to start up at a much faster pace. Also, due to Executive Meddling forcing J. K. Rowling to slim down Chamber of Secrets, there is a lot of Fridge Brilliance here when compared to Chamber.

Followed by Harry Potter and the Deathly Hallows. It was adapted into a movie in 2009.