This Is My Chair 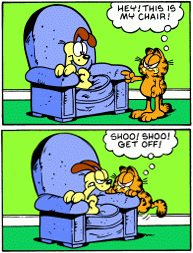 There are many like it, but this one is mine.
Sheldon: This seat is ideally located, both in terms of the heat source in the winter and the crossbreeze in the summer. It also faces the television at a direct angle, allowing me to immerse myself in entertainment or gameplay without being subjected to conversation. As a result, I've placed it in a state of eternal dibs.
Leonard: ...Can you do that?
Sheldon: "Cathedra mea, regulae meae" — that's Latin for "My chair, my rules"
— The Big Bang Theory
Advertisement:

A character is extremely territorial about where he sits: a favourite chair, spot on The Couch, park bench, or whatever. Either they never sit anywhere else, no one else is allowed to sit there, or often both.

This can develop, as on Friends, from characters always sitting in the same place out of necessity in a Three Cameras show, and eventually having their relationship with that spot lampshaded.

Alternatively it can be an ordinary character trait, possibly a kind of Security Blanket for a character with Super OCD. In a military (or Mildly Military) setting, the commanding officer ordering someone out of his chair can serve as an assertion of authority.

If the character dies, do not expect that chair to be filled any time soon.

Not to be confused with This Is My Side, a stock sitcom plot where a shared space is split down the middle. Should the two tropes ever meet, expect the chair's owner to find himself cut off from using it (or to try declaring it an enclave within his enemy's territory).